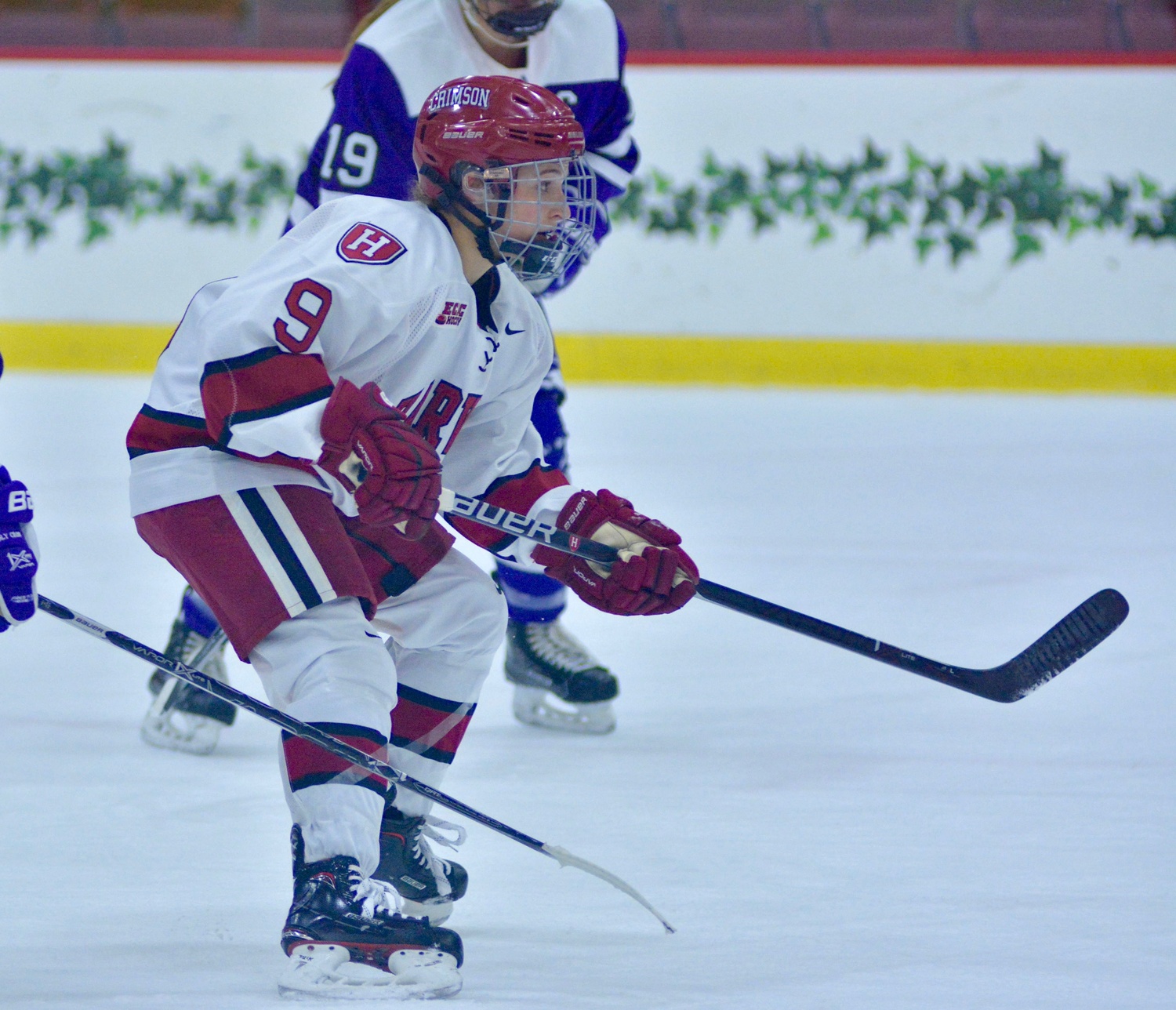 Senior forward Bradley Fusco has netted one goal this season.

Coming off its 7-3 victory against Holy Cross, the Harvard women’s ice hockey team traveled to face the number one team in the country, the Wisconsin Badgers. The Crimson rolled into the weekend looking to continue its win streak, ultimately falling short twice, but not before forcing back-to-back overtimes.

After losing in overtime on Friday night, Harvard (2-5-1, 1-3 ECAC) entered LaBahn Arena in Madison, WI. on Saturday looking to return the favor.

“It really excited us,” junior forward Kat Hughes said. “Knowing that we finished the Friday game with a tough ending, that overtime goal that Wisconsin (15-1-0, 7-1 WCHA) scored was really in our minds.”

The first score of the game came nearly six minutes into the second period thanks to Wisconsin’s freshman forward Britta Curl with an assist from junior forward Abby Roque. The Crimson could not answer back in the second quarter, entering the final period behind by one.

“Never too high, never too low,” captain and senior forward Kate Hallett said. “If a team puts up a point on us, we don’t get low, we stay up and we get right back to the center face-off, ready to respond. A huge thing is resilience and being able to answer back.”

In the third period, the Crimson capitalized on an opportunity to even up the score. Freshman forward Kristin Della Rovere stole the puck and let it fly towards the goal, bouncing off the Badger goalie. Rushing in from the side, captain and senior forward Kate Hallett scooped up the rebound and buried it behind the Badger net.

With the score tied up, both teams headed into overtime ready to play another period of hockey front of the excited Madison crowd.

“Going into overtime,” Hallett said. “A huge piece is just to continue, it’s like a fourth period. You keep doing what you have been doing, continue leaning one another, and keeping each other up.”

In overtime, the Badgers managed to take advantage of a power play opportunity. Senior forward Annie Pankowski scored the final goal with 23.7 seconds left, netting her second game-winner against Harvard.

“These two games this past weekend are keeping us hungry and eager to play, ” senior forward Bradley Fusco said. “Keeping us excited to get back out there and show everyone what we can do.”

Looking to continue its win streak, Harvard arrived in Madison, WI. to take on the number one team in the country, the Wisconsin Badgers on Friday.

“One thing our coach said to us was this weekend we were going to be the hunters, not the hunted,” junior forward Kat Hughes said. “We went in with that hunter mentality and we were not going to give Wisconsin anything.”

The first period of play was a fast-paced one with galvanized offenses trading shots. Within the first four minutes of the period, freshman forward Kristin Della Rovere slammed the puck in the net during a power play, with senior defender Kaitlin Tse and captain and senior forward Lexie Lang each netting an assist.

During the rest of the first period, the Badgers managed not only to answer back with a goal from senior forward Annie Pankowski, but take the lead with an additional tally from junior forward Presley Norby.

The second period saw a show of formidable defense from freshman goalie Lindsay Reed. The rookie made 14 saves against the Badgers, leading her eventual game total of 47 saves, two saves shy of her career high of 49 saves.

In the final two minutes of regulation, captain and senior forward Lexie Lang hammered the puck home, tying the game at two apiece and forcing Wisconsin into its first overtime of the season.

“We were all really excited,” senior forward Bradley Fusco said. “We knew that we deserved to play there and we deserved to be in that moment. It was really fun because it had a sold out crowd, so we were playing in front of over 2500 people.”

With 1:54 remaining in overtime, senior forward Annie Pankowski scored again for the Badgers, resulting in a Wisconsin victory.