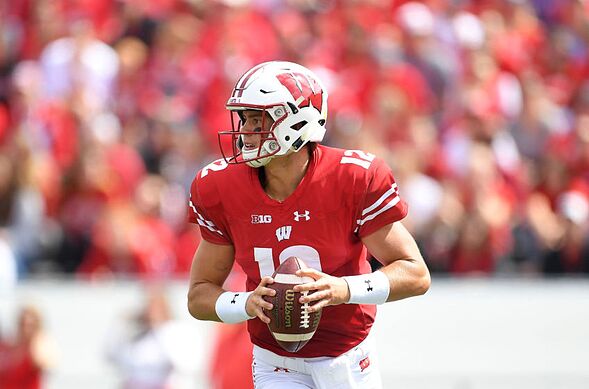 MADISON, WI – SEPTEMBER 08: Alex Hornibrook #12 of the Wisconsin Badgers looks to pass during the second half of a game against the New Mexico Lobos at Camp Randall Stadium on September 8, 2018 in Madison, Wisconsin. (Photo by Stacy Revere/Getty Images)

Following a disappointing home loss to BYU, make sure to keep an eye on these five players in the Wisconsin Badgers-Iowa Hawkeyes game.

The Wisconsin Badgers lost a lot earlier than anyone expected. Even in the worst-case scenarios, their first loss wasn’t supposed to come until this week against the Iowa Hawkeyes. Instead, Wisconsin finds themselves trying to avoid back-to-back losses, all but ending any chance they have at making their first-ever College Football Playoff.

Wisconsin still has a decent shot to make the playoff if they run the table in the Big Ten and then win in the Big Ten Championship game. However, they’ll have to do so convincingly and hope for a few losses from teams ahead of them. It will also help if BYU continues winning as well.

There’s still plenty of time for that to play out and, for now, the Badgers must be solely concentrated on Iowa, as they can’t allow BYU to beat them twice.

As you’re sitting at home, at a bar, or at a wedding like I unfortunately have to be at, keep an eye on these five players. These guys will determine the outcome of the game, one way or another, for the Badgers.

How to watch, odds, and more for Iowa vs Wisconsin
No. 18 Wisconsin at Iowa