Wisconsin Badgers basketball at a glance 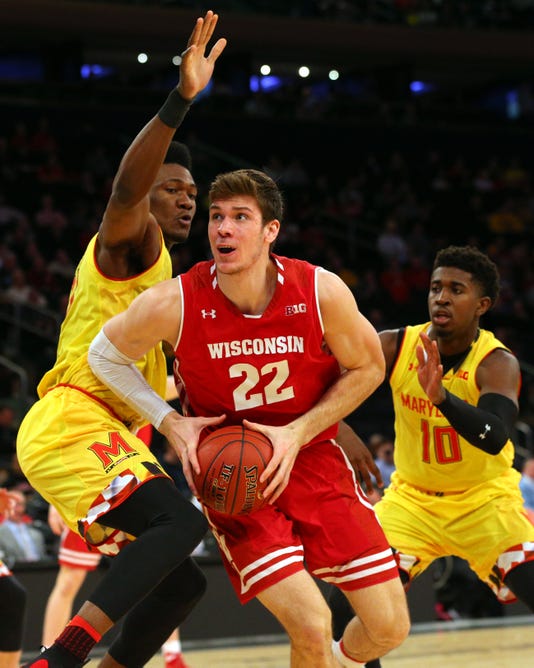 BADGERS AT A GLANCE

21 Khalil Iverson (6-5 Sr. F): Iverson developed into a terrific on-ball defender last season and was active on the glass.

34 Brad Davison (6-3 Soph. G): Davison is healthy and able to use both arms after undergoing off-season surgery on his left shoulder.

2 Aleem Ford (6-8 Soph. F): Ford likely will miss at least a month after suffering a knee injury in practice. He shot 40.9% from three-point range and 80.8% from the free-throw line but hopes to expand his game and score closer to the basket.

23 Kobe King (6-4 Fr. G): A knee injury limited King to 10 games last season. He could develop into a versatile scorer and tenacious defender.

12 Trevor Anderson (6-2 Soph. G): Anderson redshirted last season after transferring from UW-Green Bay. He has been slowed by a knee injury but should be in the mix for playing time at point guard.

15 Charlie Thomas (6-8 Sr. F): If Thomas can give UW rebounding and defense for a few minutes each game he will help the team.

13 Tai Strickland (6-2 Fr. G): UW shouldn’t need Strickland this season but he is already a tenacious defender and that skill could mean playing time.

32 Joe Hedstrom (7-0 Fr. C): A walk-on who will redshirt and be on scholarship for four seasons. The staff hopes he can develop into a force on the defensive end who also can score.

30 Owen Hamilton (7-0 Soph. C): Hamilton, from Prescott, must sit out this season after transferring from Northern Illinois.

3 Walt McGrory (6-3 Soph. G): McGrory is an excellent perimeter shooter. That skill will help McGrory play the role of sniper in practice against UW’s No. 1 unit.

31 Michael Ballard (6-4 Soph. G): A walk-on from Oak Park, Ill., Ballard played in one game last season. He will also be on the scout team.

4 Carter Higginbottom (6-0 Fr. G): Walk-on from St. Ignatius in Chicago who will be on the scout team.

Outlook: Can freshman guard Romeo Langford, projected to be a star, mesh with the returning talent and lead the Hoosiers to a title?

Outlook: This should be Miles’ best team and it is NCAA or bust.

Outlook: UW should have more depth and flexibility in the backcourt and can surround Ethan Happ with scorers.

Outlook: Can Carsen Edwards, the league’s preseason player of the year, do enough to replace four departed starters?

Outlook: Pitino appears to be bringing in talent, but the Gophers must stay healthy and better execute the fundamentals.

Outlook: Iowa has plenty of scoring potential but must commit to defending every night.

Outlook: Can the Nittany Lions overcome the early departure of guard Tony Carr, who sometimes carried the team last season?

Outlook: The Wildcats fell off the map one season after making the NCAA Tournament and have backcourt questions this season.

Outlook: Sophomore guard Trent Frazier is the best returning player on a team with six freshmen and two transfers eligible to play.

Outlook: The Scarlet Knights will defend hard, but will they score enough with Corey Sanders and Deshawn Freeman gone?

James Palmer, Nebraska (Sr. F):  Palmer scored in a variety of ways (17.2) but needs to improve his efficiency.