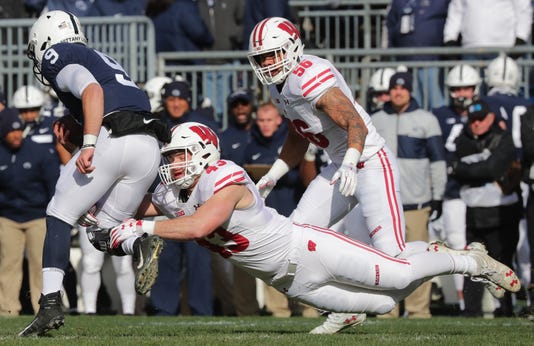 STATE COLLEGE, Pa. – You know that annoying sound made when the air rushes out of a balloon until it is completely deflated?

That is an apt description of Wisconsin’s latest loss – a 22-10 decision to No. 20 Penn State on Saturday at Beaver Stadium.

UW’s defense forced a punt after giving up only one first down on the opening series of the game.

Jonathan Taylor raced 71 yards for a touchdown on UW’s third offensive play, on third and 2, to help the Badgers take a touchdown lead just 4 minutes 56 seconds into the game.

The rest of the day, save for a few individual plays, belonged to Penn State, which rode the arm of Trace McSorley and the feet of Miles Sanders to the victory.

Penn State (7-3, 4-3) defeated UW for the fourth consecutive time. That streak includes a 31-24 victory in Madison that knocked UW out of the running for a BCS bowl and a 38-31 victory in the 2016 Big Ten title game to deny UW a berth in the Rose Bowl.

McSorley, playing on a bad right knee, completed 19 of 25 passes for 160 yards and a touchdown.

Sanders made UW defenders clutch air all day and finished with 159 yards and a touchdown on 23 carries.

Taylor finished with 185 yards and the lone touchdown on 20 carries but UW continued to struggle to finish drives.

Coan completed 9 of 20 passes for 60 yards. He had two fumbles and one interception.

UW got the fast start it wanted.

Penn State took the opening kickoff and got one first down but on third and 3, linebackers Zack Baun and Andrew Van Ginkel combined to sack McSorley for a 9-yard loss.

UW took over at its 21 after the punt and converted a third-and-2 chance in a huge way on its third offensive play.

Taylor took the handoff from Coan and surged through the middle of the line and into the clear. He out-ran several defenders to the end zone to help UW take a 7-0 lead with 11:04 left in the quarter.

UW briefly lost Van Ginkel (right ankle) with 10:27 left in the quarter and then cornerback Rachad Wildgoose was called for pass interference on the next play, on third and 8.

The Nittany Lions took advantage of the penalty, which moved the ball to the Penn State 42, to drive for the tying score.

McSorley completed 4 of 5 passes for 42 yards, capping the drive with a 14-yard strike to DeAndre Thompkins with 7:41 left in the quarter.

Taylor ripped off a 27-yard run to the UW 44 on the first play of the next series. But three plays later, on third and 1 from the Penn State 47, Coan fumbled the snap and the Nittany Lions recovered at their 48.

That led to a 49-yard field goal by Jake Pinegar with 1:53 left in the quarter.

The Badgers failed to convert another third-down chance – this time Taiwan Deal was stuffed for no gain on third and 2 – and punted on the final play of the quarter.

Penn State took over at its 15 to start the second quarter, with the wind at its back and went three-and-out.

UW did the same, however, and Penn State took over this time at its 40 after a 36-yard punt by Connor Allen.

Sanders ripped off a 23-yard run to the UW 17 on third and 7 and capped the drive three plays later with a 1-yard dive with 8:09 left in the half.

Pinegar pushed the extra-point attempt wide right, however, and the lead stood at 16-7.

After Coan hit tight end Kyle Penniston for 3 yards to the 35 on third and 3, Taylor dropped a pass in the flat and guard Beau Benzschawel moved before the snap.

That left UW facing second and 15 from its 30. A low shotgun snap came on the next play and Garrett Groshek was limited to a 1-yard run.

Coan was sacked for a 10-yard loss on third down and UW had to punt again.

The Nittany Lions had two chances to add to the lead but UW’s defense held both times.

Penn State drove from its 37 to the UW 27 and on fourth and 10 decided to go for the kill. A procedure penalty pushed the ball back to the 35, however, and the Nittany Lions chose to punt.

UW took over at its 6 with 1:03 left and then ran on three consecutive downs to move the ball to the 29.

Facing third and 3 with 18 seconds left, the Badgers tried to catch Penn State off-guard but Coan’s pass to fullback Alec Ingold was short and cornerback Amani Oruwariye made an easy interception at the UW 46 with 12 seconds left.

Backup quarterback Tommy Stevens scrambled for 20 yards and got out of bounds with three seconds left.

UW took the second-half kickoff and drove from its 25 to the Penn State 13 and appeared on the brink of scoring a touchdown.

Taylor lost 2 yards on second and 5, however, and Coan underthrew A.J. Taylor in the right flat on third and 7 and the ball fell incomplete.

Rafael Gaglianone salvaged three points with a 28-yard field goal to pull UW within 16-10 with 9:45  left in the quarter.

The Nittany Lions ran a fake punt to pick up 1 yard to their 37 on the fourth play of the drive and Baun was called for unsportsmanlike conduct after the play was over.

That gave Penn State a first down at the UW 48 and the Nittany Lions parlayed the sequence into a nine-point lead.

UW took over at its 27 with 11 seconds left in the third quarter and put on a clinic on how to play undisciplined football.

Coan was pressured and forced to throw the ball away on fourth and 10 from the UW 27.

Penn State then took over at its 45 after a 28-yard punt by Allen.

The Nittany Lions took 6:40 off the clock during a 13-play, 49-yard drive that ended with a 23-yard field goal by Pinegar.

UW’s next-to-last chance ended with an incompletion on fourth and 5 with 2:44 left. After Baun recovered a fumble at the Penn State 30 with 1:44 left, Coan’s fourth-down pass was intercepted with 34 seconds left.