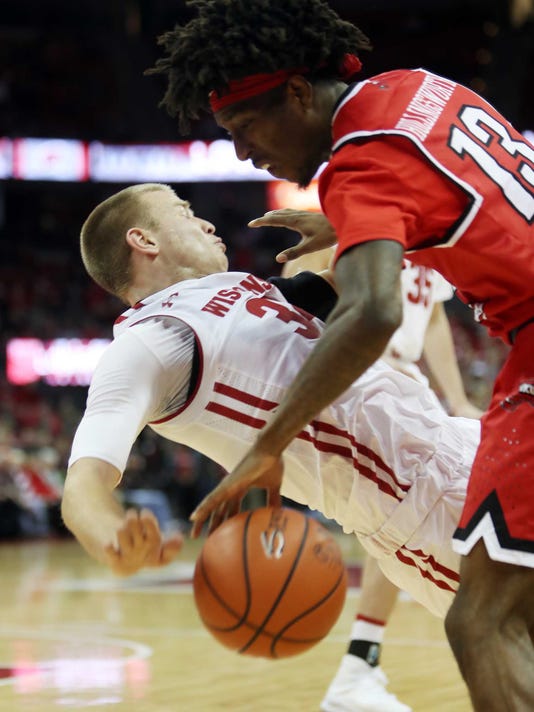 BOWLING GREEN, Ky. – Brad Davison’s teammates agree that the team, just for fun, should hand out some sort of trophy to the player likely to draw the most charges.

They also agree it would be a one-man race.

“We already know who that is going to,” redshirt sophomore Aleem Ford said chuckling. “Brad Davison.”

He has drawn 41 charges in 45 games at UW. He drew 35 in 33 games last season and has six in 12 games this season. The latter number is second on the team behind fellow guard D’Mitrik Trice, who has drawn a combined 17 charges in 59 games.

“The way I look at it is this,” Davison explained when asked about his desire to draw charges. “There are certain plays in basketball that change the momentum of the game. On the offensive end, it is a slam dunk or an and-one.

“Defensively it is taking a charge because it gets everyone into the game. It gets the bench up. It is in the film the next day. It is infectious. Those are big plays that bring the team together. You can see how we celebrate after and are helping each other up.

“That is what I do when I play basketball. I try to help the team win.”

Davison drew a charge with 38 seconds left and then with 2 seconds left in a tie game drew another foul that had Stansbury fuming.

The officials called a foul on Nelson and Davison hit the first of the bonus free throws to give UW a one-point lead and then intentionally missed the second.

“I love physical contact and it is something that I miss to be quite frank with you,” said Davison, who played football and basketball in high school. “There is a physicality in football that there isn’t really in basketball. I’ve never been afraid of hitting somebody or getting hit.”

That fearlessness is one of the traits that help Davison draw charges – and the ire of opposing fans. The zenith this season came when Davison drew four charges in UW’s 79-75 victory over North Carolina State.

“It is a little bit of everything,” said assistant coach Joe Krabbenhoft, who was known for his physical play with the Badgers. “Brad would probably tell you it is studying opponents and where they like to go most. When they go that way, do they lower their shoulder? Do they spin and then lower their shoulder? I think there is so much that he studies. I think that gives him an advantage.

“I think the other thing is courage and toughness. Being able to stick your nose in there and not knowing what is behind you when your head is going back. He is willing to risk his body to help the team.”

Former UW guard Josh Gasser, who was adept at drawing charges, has watched Davison closely for more than a year.

“He is exceptionally good at it,” Gasser said. “One thing where he is way better at it than I was at is taking it 30 feet from the hoop. He seems to take a lot on the perimeter, like the N.C. State game at the end.”

Davison drew his fourth charge against the Wolfpack with 16 seconds left when he anticipated guard Markell Johnson would drive from the left wing. Davison got in front of Johnson and drew the foul with UW holding a three-point lead.

“He’s got a knack for understanding what guys are going to do and he is aggressive in trying to make a play and creating a turnover,” Gasser said. “I was more conservative in trying to keep guys in front of me and contesting and making them take a tough shot.

“That is one play you can’t really teach. You either have it or you don’t. And clearly, Brad has it.”