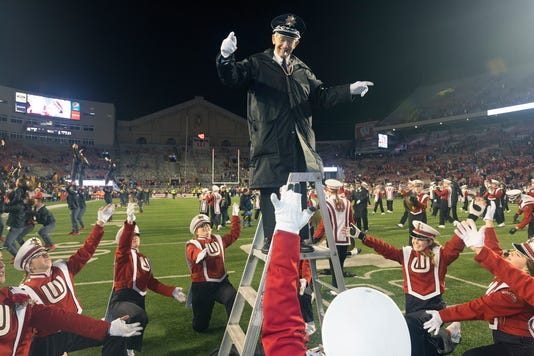 MADISON – Over the years, over the decades, Mike Leckrone has said he would know when it was time to retire.

Standing on the sideline of Camp Randall watching his musicians run out onto the bright green turf and then play the first notes of “On Wisconsin” as they marched down field, it was always the same reaction: the hairs on the back of his neck stood up.

When that stopped happening, when he no longer felt the excitement, Leckrone figured it would be time to turn in his uniform.

“It’s a very emotional time. You feel the school spirit, you feel the tradition, you feel all of the things that have happened, not only about the band but about the university,” said Leckrone, 82.

“I made the comment that when that doesn’t happen, I’ll know it’s time to quit. Thankfully it still does happen.”

And so it did on Saturday as Leckrone appeared in his last game at Camp Randall.

It’s fair to say that few people at Saturday’s game remember a time when Leckrone wasn’t wielding his baton at Camp Randall. After all, the beloved band director has been a fixture at football games for the last 50 years.

Players, coaches and athletic directors have come and gone over five decades. Leckrone and the marching band have been the one constant at Camp Randall, a pulsing, rhythmic sea of red, black and white playing the soundtrack of generations of UW alumni.

Before Leckrone there was no Fifth Quarter, no chicken dance, no “Theme from 2001: A Space Odyssey”  repurposed with the team’s fight song as “Space Badgers.” No one sticking around after football games. No one shouting “When you say Wis-con-sin … you’ve said it all!”

In a way, the man has single-handedly changed football Saturdays in Madison.

In January 2017, Leckrone underwent heart bypass surgery. In August that year, his wife of 62 years died. They had met in junior high when Phyllis was second chair trumpet and he was first chair. He carried in his uniform pocket a photo of the two of them taken at their first Rose Bowl in 1994. 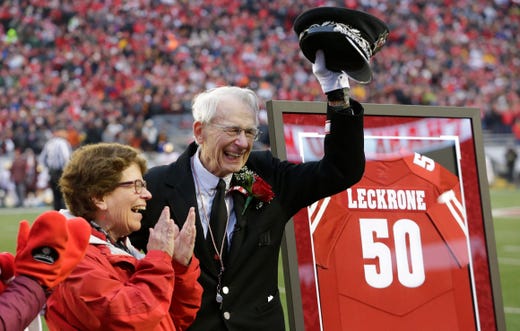 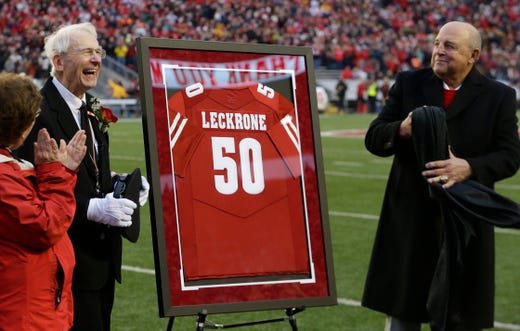 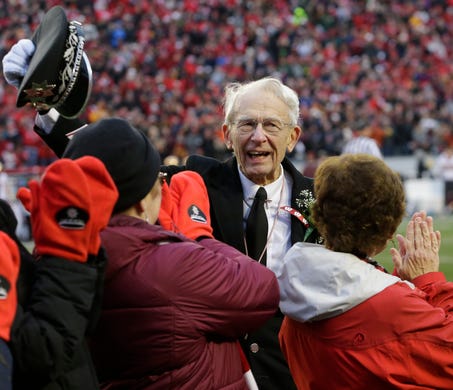 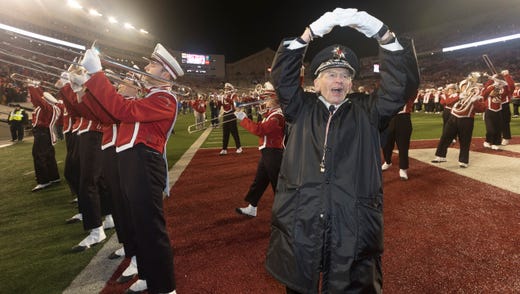 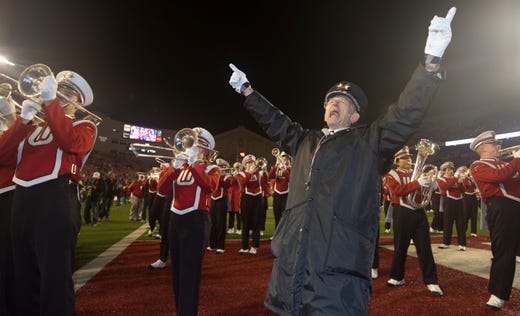 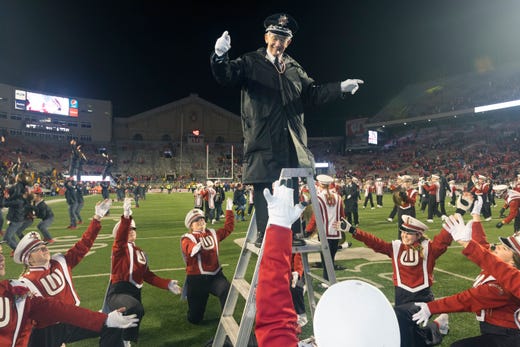 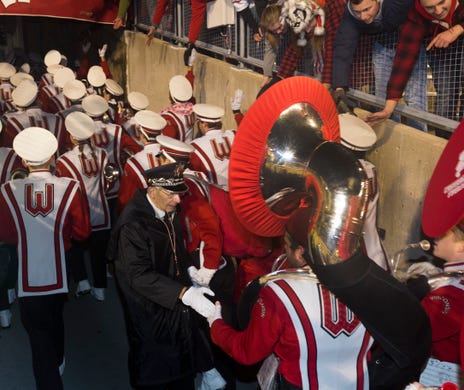 He bounced back from heart surgery to lead the band last year. But this past August as musicians prepared for the 2018 fall football season, Leckrone told them in an emotional meeting at the end of practice that he was retiring at the end of the school year.

“I wanted to make sure I stopped before I had to stop or somebody told me I had to stop,” Leckrone said in an interview in his office in early November. “I talked to other people who have retired and they said you’ll just know when it’s right. I just felt like this was the right time.”

News of Leckrone’s pending retirement spread swiftly. Former band members began posting photos on social media with the phrase “I played for Mike.” The number returning for the annual Badger Alumni Band game — when alums play a pregame and halftime show — exploded as folks realized it was the last time they would play under Leckrone’s direction. 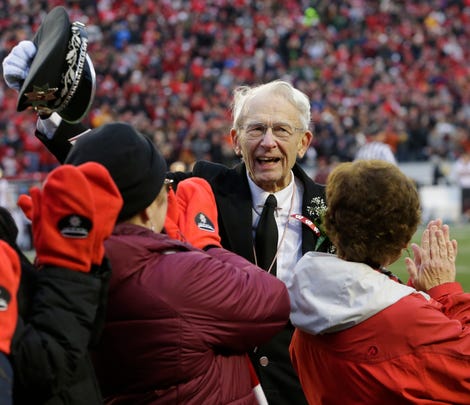 Normally 250 to 300 people march in the alumni band but in September, 528 participated in the pregame show — all wearing red T-shirts emblazoned with his name — and another 200 tried to sign up but couldn’t because there was no room left on the field, said Dean Teofilo, president of the UW Alumni Band.

“There were some alumni who had never been back, some who hadn’t been back in 25, 30 years,” said Teofilo, a trombonist who marched 1980-’84 and whose daughter Grace is a senior playing trumpet in the band. “But this was the year they were going to come back and support Mike.”

Leckrone has led the band for so long several generations have passed through the ranks, including the children and even the grandchildren of his students. Many heard about his enthusiasm and leadership from their parents or siblings and vowed to try out for the band.

Maryellen Pawley, a senior cymbal player from Menomonee Falls, is the third member of her family to march in the band. Leckrone’s last football game was also her last in a Badger band uniform, something she said was particularly emotional.

“It’s unlike any marching band,” Pawley said. “Everyone on campus knows who (Leckrone) is. Everyone loves him.”

Marching in Leckrone’s last band has given players an added urgency, particularly for upperclassmen who have worked with him for several years and know it’s an end of an era, said drum major C.J. Zabat Jr.

“It’s definitely bittersweet. I really wanted to make sure this year was his best,” said Zabat. “I’m so happy we got to share this last year with him.”

He considered the band ‘a sleeping giant’

There was a time when marching in the band was decidedly uncool. When Leckrone was hired in 1969, the Madison campus was a hotbed of anti-Vietnam war protests. Wearing a military-style uniform and marching in lockstep at Camp Randall back then was often derided, not cheered.

Leckrone actually applied for the UW job a year earlier but was turned down. He was the director of Butler University’s band in his home state of Indiana but wanted to move to a bigger program and considered Wisconsin’s band “a sleeping giant,” he said. Leckrone also applied for the University of Minnesota band director opening but didn’t make the cut.

Then a year later, UW offered him the gig. Though he was excited, Leckrone knew that in the previous three years the football team had not won a game and the band had churned through three directors. The number of musicians — only men were allowed to join the band until the mid-1970s — had dwindled to less than 100 who frequently played to half-filled stands.

There was also no pep band at basketball and hockey games. That first year he had to recruit musicians and encourage his players to find others who could play trombone or tuba just to fill the ranks.

In the beginning, he worked on simple things like the snap of the “horns up” movement and changed the marching style to what’s known as “stop at the top” — where the knee hesitates for a fraction of an instant. Slowly the band grew and so did Leckrone’s reputation as an innovator. He wrote all his own musical arrangements and the charts for each show’s formations, a rarity among college marching bands.

Leckrone also was adept at inspiring his musicians while pointing out their mistakes, often with humor.

“He didn’t want us to only be a good marching band, his competitiveness wanted us to be the best band on the field in the United States that day,” said Teofilo. “I think the fans in the stands realize they’re watching one of the best bands in the country and they know Mike has everything to do with what they’re seeing on the field.” 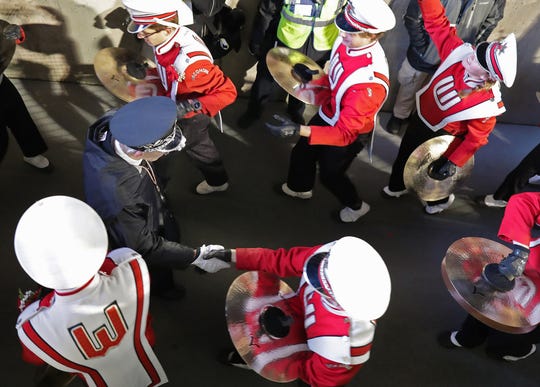 University of Wisconsin Marching Band Director Mike Leckrone leaves the field following the Wisconsin Badgers’ loss to the Minnesota Gophers on Saturday at Camp Randall in Madison. Leckrone is retiring after 50 years as leader of the band. (Photo: Mark Hoffman / Milwaukee Journal Sentinel)

Perhaps it’s fitting that Leckrone’s final game in Camp Randall was against Minnesota, the school that passed on his résumé half a century ago. He could have been directing the Minnesota fight song for all these years.

“It’s not nearly as good a song as ‘On Wisconsin,’ ” Leckrone joked.

When he was hired, Leckrone figured he would eventually move into administration after leading the marching band for five or six years. But he quickly realized “what I wanted to do was to make music and make an impression on people.”

A national search is underway to find Leckrone’s replacement. He’s not part of the search and doesn’t want to be, instead deciding to make a clean break once he finishes hockey and basketball seasons and the spring concert.

Leckrone is not sure what he’ll do in retirement, something he admits is a bit frightening because almost all of his adult life has revolved around college bands. He and his wife often traveled to New York, Los Angeles and Las Vegas, where Leckrone frequently saw shows and concerts to glean ideas for future halftime performances. He used to write high school band music but gave it up when the demands of the UW band got to be too much. Next year, Leckrone said he’ll probably resume composing music.

On Saturday, Leckrone chose for his last halftime show a medley of Camp Randall favorites including “Build Me Up Buttercup,” “Jump Around” and “Brown Eyed Girl” — music that’s normally piped through the PA system.

Senior band members wore red rose corsages signifying their last football game. And for the first time, Leckrone wore a corsage, because it was his last game, too.

When tuba players marched around the stadium in the fourth quarter, playing “On Wisconsin” for fans, the red coverings over their tuba bells spelled out “THANKS FOR 50 YEARS!”

During a timeout at the end of the first quarter Leckrone was presented on the field with a framed No. 50 Badger jersey by Athletic Director Barry Alvarez as the crowd gave him a standing ovation. A video was shown on the scoreboard featuring famous Badger football players like Al Toon, Joe Thomas and J.J. Watt congratulating Leckrone. At the end of the presentation the sound from the crowd rivaled that of a touchdown, perhaps even louder considering the Badgers only scored two TDs on Saturday.

In the stands fans chanted his name, shouted out “Thanks Mike!” and held up cardboard cutouts of his face.

He has an uncanny ability to learn every band member’s name shortly after they join the group and remember their names years and even decades later. Leckrone’s words and example have resonated with them, especially when he talked about living for the moments of happiness in their lives.

“When you go through that tunnel for the last time, it will be a combination of moments of happiness for all the memories it stirs up but also moments of sadness because I know I won’t do it again,” Leckrone said.

At the end of the game, after the Badgers hadlost to Minnesota, after the final Fifth Quarter, as the sounds of “Varsity” scattered in the chill evening air, Leckrone blew his whistle and his band marched out of Camp Randall.

Leckrone walked backward through the tunnel, shaking the hands of his musicians as they left. Then he turned and walked out.

He didn’t look back.