Playing in different combinations has given Badgers’ DBs confidence 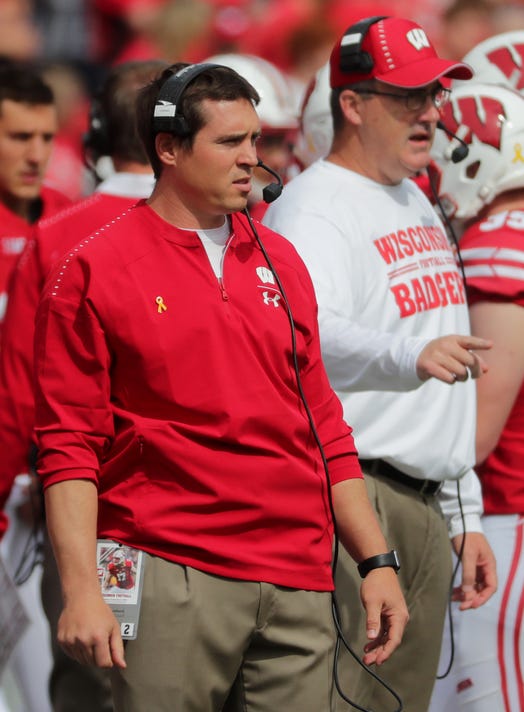 UW defensive coordinator Jim Leonhard has made sure his defensive backs get to practice in different combinations so they are prepared when injuries strike.(Photo: Mark Hoffman)Buy Photo

Leonhard, in his second season as defensive coordinator, wanted the members of the secondary, young and old alike, to be uncomfortable.

To ensure a certain level of stress, Leonhard routinely mixed and matched cornerback and safety pairings.

“I do it all the time just to get them out of their comfort zone,” he said. “Try to force them to grow up a little bit and learn how to communicate.”

That plan has helped prepare the players for the constant change caused by the injuries that have hit the secondary.

Hicks (leg) is questionable and Blaylock (leg) is out.

“You don’t really know who is going to be back,” Leonhard said. “The biggest thing you’ve got to do is prepare a game plan that guys can execute, experienced players all the way down to inexperienced players.”

Despite the 38-13 loss to the Wolverines, the play of several inexperienced defensive backs left the coaches encouraged.

Safety Eric Burrell, a redshirt sophomore, made his first start and recorded a team-high 11 tackles. He had six tackles as a redshirt freshman in 2017.

“Eric has experience,” Leonhard said, “but he is looking left and right and leading a very young, inexperienced group.”

Pearson had missed UW’s first five games while recovering from a leg injury. He recorded five tackles, including one for loss, and forced a fumble against the Wolverines.

“Reggie and Eric Burrell are thumpers,” outside linebacker Zack Baun said of their physical style of play. “It is nice to know they have the confidence to step in when it is needed.”

Perhaps most impressive was that Pearson didn’t look like a freshman making his college debut – in front of more than 100,000 people in his home state.

“Reggie is a dynamic player,” Leonhard said. “For a number of reasons that was supposed to be way too big for him and it wasn’t. It was exciting to see that.”

Freshman cornerback Rachad Wildgoose made his first college start. He broke up a pass in the end zone and had five tackles, although he acknowledged he needs to be better in run support.

“I love what Rachad is doing on the outside right now,” Leonhard said. “He is playing really well and has kind of figured out who he is.”

Wildgoose, from Miramar, Florida, seemed unfazed when talking this week about his first start.

Asked how he handled being thrust into a pressure situation, he said: “I like it. I like trying to step up for my team.

“The game really wasn’t a transition. It felt like practice. There are just more people watching.”

UW’s injury-riddled secondary will be tested again against Illinois, though more in run support because the Illini are fourth in the Big Ten in rushing at 228.8 yards per game.

The unit suffered a handful of communication breakdowns against Michigan. There were missed tackles. Yet overall the unit held up considering the constant change because of the injuries.

“I was very impressed,” senior linebacker T.J. Edwards said. “I remember my first snap against Alabama. I couldn’t fit one play. And those guys were all over it.

“I thought for the most part their confidence was there.

Wisconsin Badgers predictions: Game 7 vs. Illinois
3 reasons to be optimistic for 2018-19 season