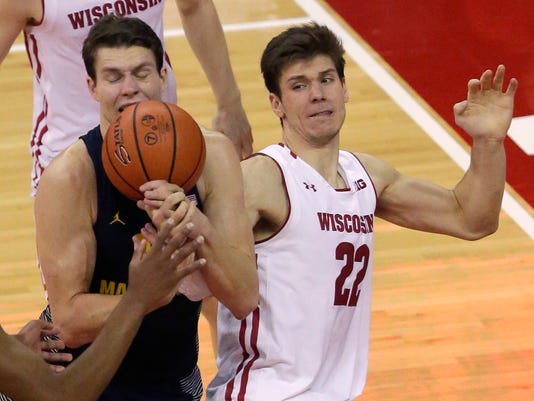 He took part in the Duke-North Carolina matchups as a point guard and also an assistant coach for the Blue Devils.

Wojciechowski sees some similarities in the Golden Eagles’ annual non-conference game against Wisconsin – with one key difference.

“This is an incredible rivalry,” he said on Thursday. “What makes it unique and different from the Duke and North Carolina rivalry is you only get to play one time. Most likely.

“If you lost your first game to Carolina, you always had a chance to get it back a few weeks later. In this rivalry you have to sit on it for a year, which is not necessarily nice.”

The next chapter in the storied history of MU (7-2) and UW (8-1) will be written Saturday in the first battle between the schools at Fiserv Forum.

“The atmosphere is going to be insane,” MU junior wing Sam Hauser said. “A sold-out house. You can’t ask for much more.

“It’s going to be a pretty great atmosphere to play in. Obviously it would be great to come out on top.”

RELATED: Some of the more memorable MU-UW games

The road team has won in each of the last four MU-UW battles. Hauser had 16 points in the Golden Eagles’ 82-63 victory at the Kohl Center last season.

Hauser and his brother, MU freshman forward Joey Hauser, grew up in Stevens Point and know the intensity that this game can breed.

“It’s all its hyped up to be, really,” Sam Hauser said. “Growing up as a kid watching these games, it’s pretty contentious from a viewer standpoint. But just playing in it is crazy.”

Joey Hauser now gets his first taste of the rivalry.

“I was a Badger fan growing up,” he said. “I turned into a Marquette fan when my brother committed, for obvious reasons. But it’s another important game. They’re all just as important as the other ones.”

This will be the final MU-UW game for Golden Eagles senior center Matt Heldt, who played at Neenah High School.

“We’ve gone back and forth the past few years,” Heldt said. “We both have good teams and both teams are looking get a win. I think it’s going to be a great game and a great atmosphere.”

Heldt had eight points and five rebounds in 30 minutes as a starter in last season’s victory. He has played a smaller role this season as a backup, but Heldt knows he’ll probably be called on to help out fellow big men Theo John and Ed Morrow Jr. to defend Badgers star Ethan Happ.

The UW center is averaging 17.7 points and 10.8 rebounds per game, and Wojciechowski called him “one of the front-runners for national player of the year.”

Happ has the potential to cause trouble for the MU frontcourt, which has been prone to foul trouble this season.

“You just got to show your hands,” Heldt said. “He’s really crafty. He can do a lot of different things with the ball. I think you just have to ready, you have to be in a stance.

“If you’re doing something wrong, he’s going to exploit it.”

MU’s defense has been much stronger than in recent seasons. The Golden Eagles have held opponents under 40 percent shooting in five of their victories. They are also averaging 4.3 blocks per game.

“We want to be a good defensive team,” Heldt said. “All the stuff the coaches have been doing to lay the groundwork for that is starting to pay off and it’s starting to show up in our games in the box score.”

Heldt also had to make a few rejections off the court in advance of the rivalry game.

“I had turn some of my family members down (for tickets), because I had so many people ask me,” he said.