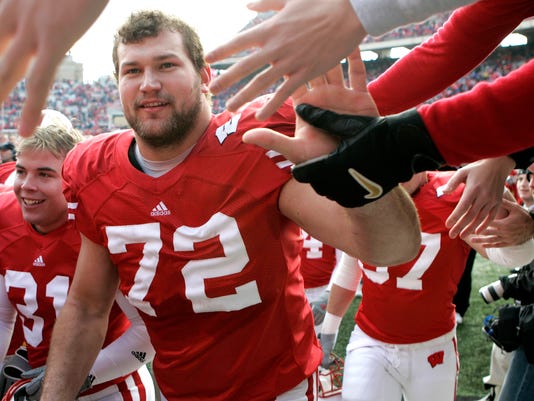 MADISON – Joe Thomas, regarded as one of the top offensive linemen in the history of the National Football League, is projected to be voted into the NFL Hall of Fame the first year he is eligible.

Thomas, 34, will have one stop to make first.

The standout from Brookfield Central High School and the University of Wisconsin is part of the College Football Hall of Fame Class of 2019.

The full class was announced Monday, before Alabama and Clemson met in the College Football Playoff title game.

Thomas was so versatile he helped out at defensive end as a junior in the 2006 Capital One Bowl. He was a two-time All-American at left tackle, won the Outland Trophy as the nation’s best interior lineman as a senior and was taken No. 3 overall by Cleveland in the 2007 NFL draft.

Thomas was named to the Pro Bowl in each of his first 10 seasons with the Browns. He didn’t miss a single play until the 2017 season, his 11th with the Browns. He suffered a torn left triceps in Week 7 against Tennessee and underwent season-ending surgery.

The injury ended Thomas’ run of 10,363 consecutive snaps, an NFL record, and eventually led to his retirement.

Thomas announced on March 14 of last year he was walking away from football.

“This was an extremely difficult decision,” he said at the time. “But the right one for me and my family.

“Playing in the NFL has taken a toll on my body and I can no longer physically compete at the level I need to.”

Thomas’ run of 10,363 consecutive snaps with the Browns was arguably his most impressive feat in the NFL.

His most impressive feat at UW came between his junior and senior seasons.

Thomas suffered a torn anterior cruciate ligament while playing defensive end against Auburn in the ’06 Capital One Bowl.

That injury all but assured Thomas would return to UW for his senior season. He underwent surgery after the bowl game and by spring ball in April was running the steps at Camp Randall Stadium.

He started all 13 games for UW that season and helped the Badgers finish 12-1 in Bret Bielema’s first season.

When asked last March about Thomas, Alvarez said simply: “He is the best lineman to ever come through here.”

Congrats to legendary @BadgerFootball OL Joe Thomas (@joethomas73) on being named to the 2019 @cfbhall Class!
https://t.co/5YaR6562S1pic.twitter.com/PB2A56nhBD