Ex-Badgers standout Derek Watt has funny response after no touchdown

Derek Watt (and his NFL brothers) thought he had a touchdown in Sunday’s NFL playoff game when the Chargers beat the Ravens.

A link has been sent to your friend’s email address.

A link has been posted to your Facebook feed. 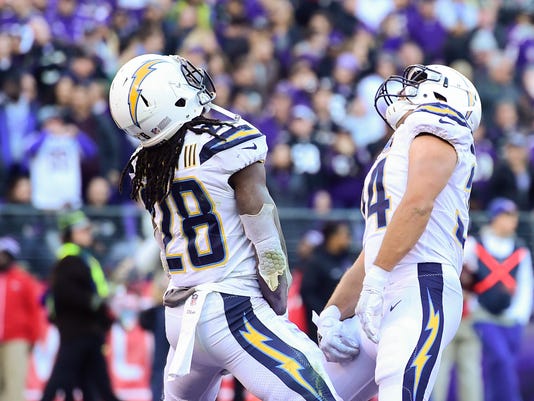 One of the more confusing moments in the AFC playoff battle between the Los Angeles Chargers and Baltimore Ravens on Sunday came when it appeared Pewaukee native Derek Watt had caught a touchdown, although the official (and subsequent replay review) ruled he was down short of the goal line.

Remember when Derek Watt was definitely in the end zone and they reviewed it and still called it no TD? pic.twitter.com/Qnq1d6vWVr

Watt, the Chargers fullback who does not have an NFL touchdown to his name yet, caught the ball while falling to the ground but appeared to roll into the end zone before he was touched, which could have been ruled a score.

@JJWatt@_TJWatt@DerekWatt34@gabriella_watt2
You are all correct it was a Watt touchdown !! Not sure what the refs were looking at! pic.twitter.com/31yqLqz9lJ

Ultimately, a former Wisconsin Badger did get a touchdown to cap off the possession, but it wasn’t Watt, though he did throw a big block on the fourth-down play. Kenosha Bradford product Melvin Gordon busted through for his first postseason touchdown, and the Chargers held on for a 23-17 win. They’ll meet New England at 12:05 p.m. CT next Sunday.

Derek, naturally, wanted the points. After the game, he tweeted a humorous response to the call.

When you’re trying to figure out why it wasn’t a touchdown… pic.twitter.com/aaGwZB9gDf

His NFL brothers, JJ and TJ, were also watching intently and expecting the call to be reversed to a touchdown.

WHAT ARE YOU LOOKING AT?!?!

Thank you! You’re almost signed up for Packers Update

Keep an eye out for an email to confirm your newsletter registration.