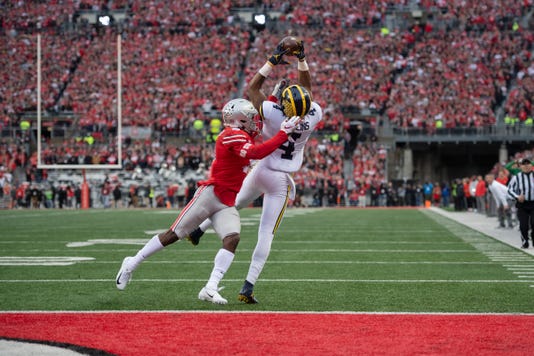 After the way the Buckeyes lit up the No. 1 defense in the nation, it would be hard not to see Ohio State getting the nod over Oklahoma. That would be the likely choice the committee will be making if the teams win their conference championship games and Alabama or Clemson don’t slip up in theirs. Here’s betting the Buckeyes get the nod.

With Ohio State getting into the playoff field, that paves the way for the Wolverines to make their first trip to Pasadena since 2007. They’d be the easy choice over West champion Northwestern. If Ohio State ends up in the Rose Bowl, Michigan could land at the Peach or Fiesta Bowl.

The committee has made it clear it likes the Nittany Lions, who it had ranked No. 12 entering the week, a spot that won’t be hurt by rolling over Maryland. If PSU doesn’t get one of the coveted games, it will be in either the Citrus Bowl or Outback Bowl.

The Wildcats have had a heck of a conference season, but they’ve never been bowl darlings because they don’t bring a ton of fans. That could lead to the West Division champs tumbling out of even this spot. But, assuming Northwestern doesn’t upset Ohio State, let’s go with the top game not in the New Year’s Six for the Cats. If not, they could end up just about anywhere on the Big Ten bowl docket.

The Spartans are counting on bowl officials to look past their paltry offense and focus on the fans they’ll likely bring – and the fact they haven’t been to Florida since last playing in the Outback Bowl after the 2011 season. If MSU isn’t here, the Gator Bowl is the next best bet, followed by the Pinstripe Bowl.

The Hawkeyes are likely the better pick over Michigan State, but they’ve been to the Outback twice since 2014, which makes the trip to San Diego seem like the perfect spot for a team that lost three times in the final five weeks.

The Badgers are in a similar position as Michigan State in the sense they’re a team that fell short of much higher expectations, which could lead to less buzz. They’ve also been in Florida three times since the 2013 season, but this still seems like a good spot for Wisconsin.

The Boilermakers had to beat Indiana Saturday to become bowl-eligible, but a high-octane offense with some young talent could be appealing to other games. There’s a chance the Boilermakers could move up higher, but the Big Apple is most likely.

Credit the Golden Gophers for upsetting Wisconsin Saturday to get a sixth win. The prize for that win is almost certainly a trip West, though the last time the Gophers played in a bowl game two seasons ago it was at the Holiday Bowl in San Diego.