Carsen Edwards proves too much for Ethan Happ, mistake-prone Badgers 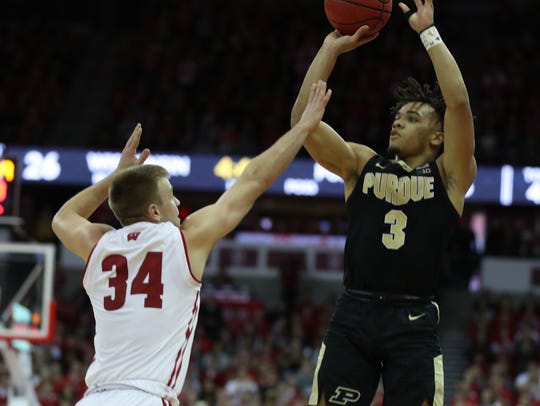 Brad Davison and his Badgers teammates had no answers on how to stop Purdue guard Carsen Edwards, who went off for 36 points in the Boilermakers’ overtime victory on Friday night at the Kohl Center. (Photo: Mary Langenfeld, Mary Langenfeld-USA TODAY Sports)

The junior guard is one of the best players in the Big Ten, if not the country.

What Gard could neither understand nor tolerate was how his team was so careless with the basketball and so ineffective in keeping Purdue off the offensive glass.

Edwards’ 36-point performance, coupled with UW’s penchant for turnovers and allowing second and third chances, proved too much for the Badgers to overcome as they suffered an 84-80 overtime defeat Friday night at the Kohl Center.

“Anything he did tonight I had seen on film,” Gard said after UW suffered its second consecutive home loss. “We knew we were going to have our hands full with him.

“It is all the controllable, self-inflicted things I think are the most disheartening.”

The Badgers’ quest to win the Big Ten regular-season title took another hit with a second consecutive home loss as they fell to 3-2 in the league and 11-5 overall.

UW entered the week No. 2 nationally in fewest turnovers per game at 9.1. Ethan Happ had eight turnovers and UW finished with 16.

“I know that I had eight of them,” Happ said, “and there’s a lot of them I could have controlled and done better.”

Purdue scored 20 of its 84 points off the turnovers and scored 12 second-chance points off 17 offensive rebounds.

“Defensive rebounding and turnovers – two things we pride ourselves on,” Gard said.

Gard was particularly perturbed by the turnovers.

“We had been so good in that area,” he said. “And to have that rear its ugly head was obviously disappointing…

“To have that transpire is unacceptable.”

UW’s final turnover came with 53 seconds left in the overtime.

Happ, who finished with 31 points, 13 rebounds and six assists, tried to fire a pass in tight quarters to Khalil Iverson. The pass came in hot and the ball bounced off Iverson’s hands.

After a Purdue timeout with 46.9 seconds left, Edwards found Grady Eifert (nine points) alone underneath. Eifert was fouled and made both free throws to give Purdue an 81-79 lead.

D’Mitrik Trice them missed on a drive and Ryan Cline (4 of 7 three-pointers, 14 points) was fouled and made 1 of 2 free throws for an 82-79 lead. Trice was then fouled before he could launch a three-pointer, with 9.6 seconds left, but also made just 1 of 2 attempts.

“He is definitely one of the best in the country,” UW’s Brad Davison said of Edwards. “Great players have great games and he had one tonight.”

Trice, a combined 5 for 23 from three-point range in UW’s previous four games, hit 4 of 7 three-pointers but just 4 of 14 shots overall for 17 points. He hit back-to-back three-pointers in a span of 8.1 seconds to help forge a 74-74 tie with 14.6 seconds left in regulation.

“All that matters is we didn’t win the game,” Trice said.

Happ got the ball to Trice but he was hounded up the right side of the court and tried to draw a foul just before the buzzer.

“If he can’t get separation, he was going to try to do it,” Gard said, adding the ball should have gone to King, who was unguarded along the sideline. “They did a good job of making him (Trice) go a little bit east and west and not letting him get a direct shot up the floor.”

Nojel Eastern, a 6-foot-6 sophomore guard, harassed Trice for most of the night and contributed 10 points.

Purdue coach Matt Painter was pleased to see his team, coming off an 18-point loss at Michigan State, build an early double-digit lead against UW, take advantage of UW’s miscues and then regroup in the overtime after faltering late in regulation.

“I thought our guys just did a good job of scrapping,” Painter said of the offensive rebounds. “You’ve got to be able to steal points against Wisconsin in some fashion. Whether that is off the glass or in transition off of tough shots or turnovers…

“For us to able to regroup,” he said, “it was tough. Our guys showed a lot of grit and a lot of fight.”

The Badgers showed again they aren’t good enough to overcome so many mistakes. After falling behind by double digits early, the Badgers twice had a lead of four points and failed to build a bigger cushion. Turnovers were a critical factor.

“That is another loss on our record that we definitely beat ourselves,” Davison said. “When you have a team down and you have them reeling, that’s when you’ve got to step on their throat. That is something we didn’t do today.

“And again, when you fall down early and you are climbing back all game that makes it tough.”