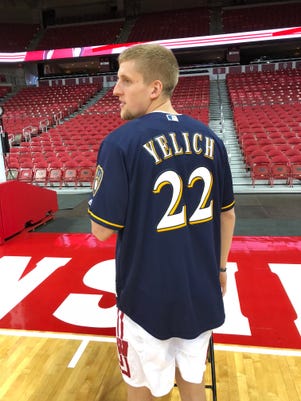 MADISON – Nate Reuvers isn’t the only Wisconsin player who reconfigured his body after the end of last season.

The sophomore forward added about 25 pounds and now carries 240 pounds on his 6-foot-11 frame.

Reuvers looked thicker and stronger during the Red-White scrimmage Sunday at the Kohl Center. He finished with six points and two rebounds for the White team, which won the first of three 10-minute periods and recorded a 41-34 victory.

Reuvers’ best offensive move came when he faked and got Ethan Happ into the air. Happ came down and fouled Reuvers, who was able to fight through contact and hit a mid-range jumper.

“He looks good,” redshirt junior guard Brevin Pritzl said of Reuvers. “He’s still got to learn how to use it but that will come in time.”

Pritzl knows because he shed 15 pounds after the end of last season and then added back 10 pounds of muscle. He is listed at 6-3 and 198.

Pritzl hit 2 of 3 three-pointers and contributed eight points, five rebounds, two assists and a steal for the White team.

“Once the season is over you see what wasn’t working and why you felt bad,” Pritzl said. “Nutrition is a big factor.

“I don’t look as chubby as I used to. I’m definitely moving better.”

The scrimmage was typically uneven.

The Red team launched too many perimeter shots, particularly early, and trailed by 21-6 after the first period.

The teams combined for 20 turnovers – 12 by the White team and eight by the Red.

Khalil Iverson, who appears a bit leaner, made just 3 of 10 shots. However, he had a nice drive that ended with a step-back jumper and was the most active player on the glass with 11 rebounds.

“I think all the guys have taken steps physically,” UW coach Greg Gard said. “Some guys have added and some trimmed it back a little bit. I think everybody physically is in better position.”

Too many shots were rushed early but it appears UW has the potential to be a better defensive team this season.

“Defensively I saw some good things,” Gard said. “You can tell where most of our time has been spent.”