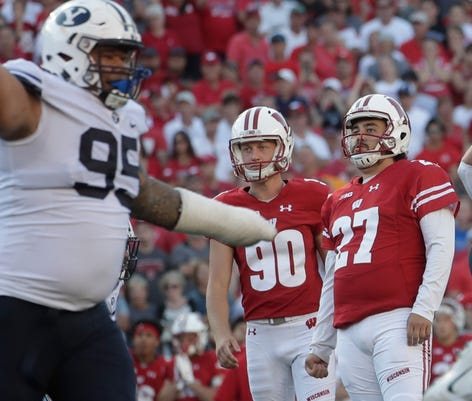 The Big Ten East might be the best division in college football.

At least, that was the prevailing opinion before the season started.

However, if the depth of the overall conference has any bearing on that assumption, we might have been way off on the strength of the Big Ten.

Sure, we’re only three weeks into the season, but the carnage that occurred across the Big Ten this weekend certainly doesn’t help, though most of it can just be chalked up as embarrassing.

It all makes the jokes come easier and the critics are allowed to bark even louder.

The real kicker, though, had to be Wisconsin’s loss at home to BYU, a double-digit underdog heading to Camp Randall Stadium. It was painful enough for the Badgers faithful as kicker Rafael Gaglianone’s 42-yard field goal attempt to tie with 41 seconds left sailed wide left.

But the impact it will have on the rest of the season will hurt worse. Why? Because Wisconsin is not a team that can come back from one loss the way Alabama or Ohio State or even Michigan can.

More: Wojo: Michigan will get its shot in a battered Big Ten

That’s not an overreaction. Life is different for the chosen few in college football and Wisconsin is not among them. If that wasn’t clear last season when the Badgers went undefeated through the first 12 games but couldn’t quite crack the top four rankings until late, then I’m not sure what is.

But it’s nothing new. Wisconsin has long been one of the most consistent programs in the country yet has rarely gathered the respect. The loss to BYU, combined with the fact Wisconsin plays in the Big Ten West means the chances for making up ground are minimal. Even a win in the Big Ten championship game might not be enough if it comes against anybody not named Ohio State. And even then, who knows?

Give the Badgers credit. They sounded like a team that believes it can rebound. And let’s be honest, they’re still good. They’ll still probably win the West.

“I still like this team. I like them and who they are,” coach Paul Chryst said. “This is where we’re at right now, and I have confidence in the group making the choice to go forward.”

The loss makes next week’s trip to Iowa one of the biggest games on the schedule. With the way things look right now, the Badgers and Hawkeyes might be the best in the West. And there’s no way Wisconsin responds from two early losses to remain the playoff hunt.

“We’re 2-1, and we start Big Ten play against Iowa, and that’s a rivalry and all that,” Chryst said. “We’ll continue to find out about these guys, but I do like this group, and I’m confident of the response, but we’ve got to go do it. We’ve got to put that into action.”

Lost in the fact the weekend’s results offered plenty of material for the Big Ten’s detractors is the fact that at least two teams have veered wildly off preseason expectations. Most didn’t expect much from Rutgers or Maryland. Even less was expected of Illinois, which lost at home to South Florida.

But many believed Northwestern could push Wisconsin in the West while Purdue was expected to carry the momentum off last year’s appearance in a bowl game.

However, Northwestern has lost two straight at home to Duke and Akron while Purdue is winless, losing close games at home to Northwestern, Eastern Michigan and Missouri.

“I do think we played to win,” Purdue coach Jeff Brohm said. “I think we played aggressive. Unfortunately, I don’t think we’re a good football team right now. I think anybody who watched us play knows that. We’ve got a lot of work to do to get better.”

Things don’t get any easier for Purdue as No. 23 Boston College comes to town next.

The same goes for Northwestern. The Wildcats get the upcoming week off but after that, Michigan comes to town followed by a trip to Michigan State.

“Our backs are against the wall, from a standpoint of overall record, but we got a lot of football ahead of us, a lot of season ahead of us,” Northwestern coach Pat Fitzgerald said. “This bye week comes at a time when we can really work our tails off to improve and I fully expect our guys will. Incredibly disappointed in the outcome of the game … These guys will respond, I believe in them and I believe in our staff.”

It’s early in the season, still, to know how a team will finish. But really, you have to wonder how comfortable a couple of the Big Ten’s coaches are, namely Illinois’ Lovie Smith and Rutgers’ Chris Ash.

“We’ve come a long way. Last year we played South Florida, we weren’t really competitive,” said Smith, in his third year at Illinois. “This year is completely different game. I thought the guys came out strong. … We had some critical mistakes that allowed them to win the football game.”

Maybe they have come a long way, but just being competitive against a non-Power Five team is hardly how a Big Ten team should be grading itself.

As for Ash, also in his third season, just look at the scoreboard. In the last two weeks, the Scarlet Knights have been outscored 107-17. And getting blown out by Kansas is never good.

“We’ve got to get better,” Ash said. “Again, I’m sitting here telling you, nobody said this was going to be easy. This is a tough turnaround. For anybody that’s frustrated more than me, I’d like to see it. I’m frustrated. But I also know we’re going to keep working.”

For what it’s worth, Rutgers made a bowl game in four of five seasons before Ash took over. The turnaround seems to be turning around the mess he has helped create.