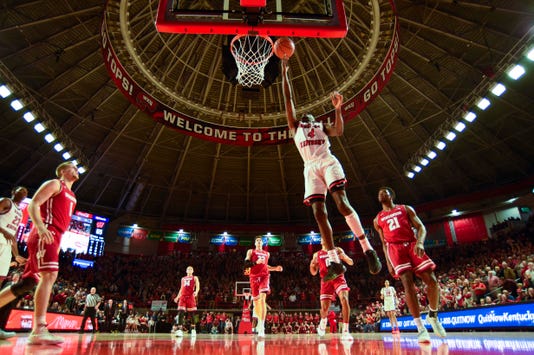 MADISON – Will Wisconsin learn from its missteps in losing to unranked Western Kentucky?

“We definitely need to focus on the defensive end, stopping guys from getting into the paint and stopping dribble penetration,” guard D’Mitrik Trice said. “Our focus this week has been on defense.”

UW (10-3, 2-0 Big Ten) resumes league play at 8 p.m. Thursday against visiting Minnesota (11-2, 1-1), a team that excels at pounding the ball inside and grabbing offensive rebounds.

Greg Gard’s team is coming off arguably its most perplexing loss of the season.

Forget that UW took the unusual step of visiting the campus of a mid-major team, one that had pointed to the game ever since the Badgers escaped with an 81-80 victory last season in Madison.

The Badgers lost for several reasons.

They missed chances to extend their lead to double digits early because of questionable shot selection; Western Kentucky was able to harass Ethan Happ without using double teams; Trice didn’t play well on either end of the floor; and UW surrendered too much dribble penetration and too many baskets in the lane.

Trice, shooting 50 percent and averaging 15.9 points entering the game last Saturday, didn’t get many clean looks and forced a few shots. He made 1 of 6 three-pointers and 4 of 12 shots overall and finished with 10 points.

“Huge key was the ability to guard Trice,” Western Kentucky coach Rick Stansbury said. “He scores 10 points an under and they get beat. This is the third time this year.”

“I think that was one of my worst games all-around that I have played at Wisconsin,” said Trice, who struggled to contain Western Kentucky’s Taveion Hollingsworth.  “Something I can control is my defense and I was really off that game. I was off on both ends of the floor and I can’t let that happen.”

Happ finished with 20 points and 12 rebounds but made just 9 of 23 field-goal attempts. He had three assists, just the fourth game this season he has had three or fewer assists.

“We doubled him once and he kicked it out and they got a basket.”

UW hit just 6 of 21 three-pointers in the loss. Minnesota doesn’t have a defender with Bassey’s length and athletic ability to guard Happ one-on-one. If the Gophers try to double Happ, UW should get open looks from the perimeter. Minnesota is allowing foes to make 35.3 percent of their three-point attempts, the No. 13 mark in the Big Ten.

UW’s defense got worse as the game progressed and the team met only 25 percent of the defensive goals the staff sets for every game.

Led by Bassey with 12 points, four Western Kentucky players scored at least eight points in the paint. They combined for 19 of the Hilltoppers’ 20 field goals in the paint.

The Hilltoppers scored 14 of their final 19 points of the first half in the paint and then opened the second half by scoring 16 of their first 25 points in the paint.

Western Kentucky turned turnovers into transition baskets and also took advantage of situations in which UW’s defense was scattered after lower-percentage shots. UW’s staff noted the Hilltoppers scored 15 points in the second half directly off UW missed shots/turnovers, without having to run any half-court offense.

“The main thing is understanding why we emphasize why every possession is so important,” UW assistant Howard Moore said. “And there were so many possessions where we didn’t get something out of it and it bit us later.”

The sophomore blocked out the non-stop boos from the crowd of more than 7,000 and hit 9 of 13 shots, 5 of 6 free throws and finished with 26 points, four rebounds and four steals.

“In our three losses it has all been self-inflicted, we think,” Davison said. “We felt like we had opportunities to win all three of those games.

“It’s a tough one to swallow. We’ve got to learn from it and move on.”